Fethiyeâ€¦the vibrant centre of the area.

Thepromenade. Walk it and discover the how close the land is to the seaâ€¦..the Lycian theatre overlooks the sea behind the harbour. Start from here, where the fishermen still clean their nets. Continue on past the moorings of the gulets which offer daily boat trips; stop off at one of the promenade cafes for a glass of tea. Pass the Fethiye Cultural Centre (FKM) and search its notice board for on-going exhibitions and performances. Curve north as the promenade turns towards Calis. You may spy the well-known fast food chains on the right. Then walk on to reach a quieter area where kids roller-skate, people jog and some just sit at the sea-brink restaurants watching their children or stare romantically out towards the islands while they await an aperitif before dusk. Continue on past more sophisticated restaurants and cafeterias to eventually reach Calis.

Calis itself: some 40 years ago Calis was THE tourist venue. With one hotel and a variety of campsites it attracted visitors mainly from Ankara. In those days there was no airport and even the road connections were not asphalt. Fethiye was a holiday resort only for the more active. As to Olu, it was inhabited by 5 families of farmers, immigrants during the exchange of peoples..

Now Calis is part of Fethiye. Many Turks live there and work in Fethiye, many Turks own summer villas and an increasing number of foreigners decide to settle here permanently. It has a homely air about it, small cafes and restaurants, family run hotels and good transport connections with Fethiye. The hinterland which was previously agricultural now boasts smart villas and apartment complexes.

Central Fethiyeâ€¦the old city. After the earthquake of 1957 most of the buildings were re-constructed. Only Paspatur and the fishermenâ€™s district behind show buildings of an earlier era.

What about the Lycian remains you may say? They date from a time when architects and stonemasons constructed to resist natureâ€™s powers. Building blocks were large and stapled to each other with a mixture of lead and iron, while older archaic blocks were polygonal, negating any movement at all.

Today despite the amount of re-used classical and archaic building materials, we still find signs of the Lycian port of Telmessos. Agraeco-roman theatre looks out to sea, a lone sarcophagus standing beside it. From this theatre a sacred way continued up the hill to the Necropolis and Acropolis. The latter is today crowned by an 11th C. castle most recently used by the Ottoman army. The extensive Necropolis dating back 2500 years broods over the town below. The Necropolis tombs would have looked bright even gaudy painted in reds, blues and greens. Colour meant majesty and powerâ€¦power to frighten away any enemy approaching the port by sea.

To catch a glimpse of the carved stonework of Lycia, her artifacts and more recent ethnographical pieces, visit the Fethiye Museum (opening hours 9 to 5 pmâ€¦closed on Mondays). It is signposted in the centre of the town.

The Commercial Centre
Fethiye is today a busy town of some 100,000 inhabitants. There is one main post-office, several banks, jewelers and clothes shops galore, multiple pharmacies and an array of electrical and electronic stores. Right in the centre of town lies a large rectangular market where fresh fish, meat, vegetables and spices are to be found. Two blocks from the market lies Paspatur with a small mosque dating to 1791, a Hamam dating to 1891, and old port buildingsâ€¦now housing souvenir shops, restaurants and bars. A spring bubbles up in the centreâ€¦â€™once drink from the Paspatur waters and you will always returnâ€™â€¦ as an old saying goes. The ducks really enjoy it, but if you want to return, donâ€™t drink!

Fethiye: What to look for in Paspatur.
Beautiful carpets and kilimsâ€¦many antique ones with naturally dyed wools. Each one tells a story, and after visiting a few shops you will be able to tell the story yourselfâ€¦.but do not get too carried away!

Fine hand-painted ceramics, glassware and other objets dâ€™art. The better ones are expensiveâ€¦ But there is always a cheaper version!

Genuine designer boots and shoes, jeans and jackets, sportswear, and as ever a selection of â€˜genuine fakesâ€™.

You can find good restaurants in Paspatur with banks near byeâ€¦notably Garanti, Akbank, and Yapi Kredi (open weekdays 9-5)â€¦and as ever the â€˜genuine fakesâ€™. 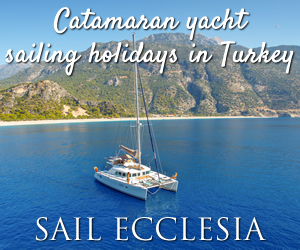